As I was browsing the Web, I read this comment of a user who considered that Windows is a necessary OS "to get things done". He said this in the context of his disappointment with Linux because of the need of the command line (it was actually Ubuntu that he meant, but people very often fail to understand that Canonical's distro does not represent accurately all other Linux distributions).

At home, I have a dual-boot desktop PC that starts by default with Mandriva Linux 2010 Spring (PowerPack). The other OS is Windows XP SP3, which I had not used for more than three months until today. After I read the comment, and since I hadn't used Windows at home for quite a long time, I thought that it would be fun to boot my desktop in XP to finish installing all the software that was pending after my last formatting, so I restarted the system in Windows "to get things done" and this is what happened:

The First Woe: Fear the Curse of Fear
The PC greeted me with the long-forgotten warning: "Your Antivirus is outdated. Click here to update it". After enjoying antivirus-free Web browsing with Mandriva, one quickly forgets that this warning is the second display of affection that you obtain in Windows after not using it for a while. 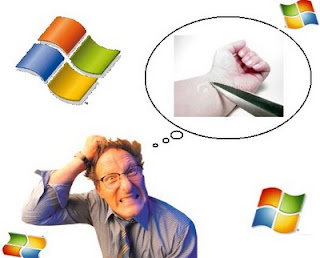 Well, I complied and clicked for the update. In so doing, I remembered that Spybot Search-and-Destroy was also outdated and, logically, I asked for an update of that program, too. After a five minute wait, both programs were ready, so I immunized the browser with Spybot and decided to run both Spybot and the antivirus to see if they could catch something...an action that took me to woe number two.

The Second Woe: Do You Care for a Byte of Memory?
The download of the AV updates was acceptable, but you know that scanning for viruses is not usually a five-minute operation. Thus, I braced myself for a rather long wait...But why waiting? I did not turn my computer on to WAIT, but to GET THINGS DONE! So, I boldly opened Word...well, "tried to open Word" is more like it. XP eats memory like candy and, when running two different scans at the same time, you understand how slow your PC can become. I took a peek at the progress of both programs and the bar discouraged me. Hence, I forgot about Word and decided to kill some time with a game that is not too heavy on resources. That lead me to woe number three.

The Third Woe: Can the Taskbar Multi-task?
The answer is NO, of course. Since the two scans prevented me from working, I opened a game. But I silenced the effects and the music and opened Winamp (a very old version that I like because of its light weight) to play music. When I was surrounded by twelve flying insects on Planet Formica and the battle was becoming interesting, XP closed the game. The reason? A memory violation...

I thought: "OK, if XP does not want me to play, I'll GET TO WORK!" I located an anti-malware program and decided to install it. But first I waited for the scans to finish. After 40 minutes, they stopped and reported no threats. So I installed the program only to remember woe # 4

The Fourth Woe: Karate Kid Computer, Turn on / turn off
In Linux, the ritual of rebooting after an install becomes a hazy memory buried in the back of your brain. But this WAS Windows, not Mandriva Linux. With full lungs, XP said to me, "I don't care what you do in Sparta, but THIS-IS- BOOTLAND!!!" and I had to reboot to try the program... After almost an hour, I was getting closer to getting things done at last.

But then the firewall blocked the anti-Malware program. When I was trying to solve the problem, the firewall showed an alert of a high-rate attempt to access my computer from the outside. And then, it flashed a warning: "the Win32 Sality Virus that disables antivirus programs is becoming too common. Your version of the firewall cannot stop it, but an upgrade of the program can. Do you want to upgrade for free?" A year ago, I would have clicked YES immediately. However, more than an hour and 15 minutes had elapsed and I had not accomplished anything. The missing installation required me to knock off the firewall, but the firewall was asking me to update! This was too much. I felt completely unproductive in front of the computer. I was mad while I thought that this was XP, the most popular OS today. From what I have seen happening to happy users, Windows 7 performs pretty much in the same fashion, except that it requires more computer resources to run properly. That, in itself, is a funny paradox. I buy clothes that fit me; I do not buy shoes too wide for my feet hoping to fatten until the shoes fit. However, Microsoft expects you to drop XP and buy Windows 7 and to buy new hardware if your PC does not fulfill the requirements for 7. So, Windows is an OS to which the computer has to accommodate! Shouldn't it be the other way around?

Overlooking that fact, you still have the same rebooting rituals and security problems in Windows 7. But wait, there's MS Security Essentials! As it is stated here, it is a paradox that the Essentials are not included with the OS. I laughed in relief at the fact that Microsoft does not make cars for, if the Redmond company did, you would probably have to go to MS EssentialsGarage after buying your car to get the brakes and the door locks! Of course, you would be very happy because you get them for free. (?!)

Following a freeze during installation and a reboot, the program finally decided to launch. I updated it and guess what? The computer asked me again for a reboot. So I rebooted it... only that this time I started Mandriva.

Some Issues and Challenges

The excessive amount of work has kept me away from my blog, that's true.  However, the fact that my Linux distros have been performing b...