On Gaming, Upgrading, and PCLinuxOS

I am nothing close to what people call a gamer.  In fact, very seldom is it that I play games. I used to play some in Windows before I migrated.  However, back then, I did not invest a lot of money on games, either.  Once I bought a nice game that Windows stubbornly refused to launch even though my machine fulfilled all the requirements.  I also bought "Tomb Raider: The Last Revelation" and enjoyed it for a while, until a Windows XP service pack prevented me from being able to use it again.

When I migrated to Linux, I had already given up on games.  I mean, I could still play some of my favorite titles thanks to DOSBox or SNES emulators but, essentially, I simply assumed that Linux was pretty much a gameless land.

One day I read a tutorial that Texstar wrote to install Desura (I did not know what "desura" was) on PCLinuxOS and I gave it a try.  I learned then that it is possible to play games on Linux. 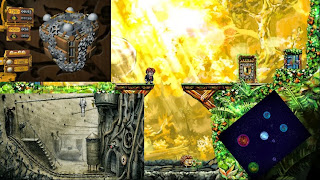 Gradually, my PCLinuxOS laptop became my door to a gaming experience on Linux; I would play the first Humble Indie Bundle games I bought for the penguin OS.  What I liked the best was that I could play most of the titles in the bundle, like Braid, Cogs, Machinarium, and Cayon Physics Deluxe (the latter two with WINE).

Nevertheless, bothered by minor KDE bug that was probably the result of my own failure to install updates for a long period of time, I upgraded the OS to PCLinuxOS 2013.10.  I actually did not have to do it, but I went ahead anyway and did it.  Although the upgrade surely fixed the KDE bug, something went wrong: I lost the Kwin OpenGL effects and the games played with WINE became unusable.


I solved the problem rather easily: I put PCLinuxOS 2013.2 back and updated the machine.  It took almost three hours, but the games worked again and the KDE bug was gone.  Sometimes you just have to revert...

Now, armed with both Desura and Steam, this laptop with PCLinuxOS has turned itself into a nice source of entertainment.

Oh, and I have bought some new games, too. I guess I will write an entry on the differences I found between Desura and Steam one of these days.
en octubre 19, 2013 1 comentario:

According to this post, OpenMandriva Lx Beta 1 is now available for downloads.

The most interesting part for me is the multiple launcher testing.

Well then, I am presently downloading the iso to see what it brings.
en octubre 19, 2013 2 comentarios:

Anne Nicolas has announced here that the last alpha of Mageia 4 is available for download.

However, this early development version is not intended to be used daily as a stable release; it should not be installed in production environments or used for writing reviews.
en octubre 02, 2013 2 comentarios: