TEST: How to know if your computer license should be revoked 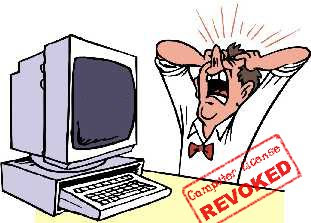 In this world of ours, where cyber-crime has taken a rise, people should be given a test to determine if they are capable to use a computer. After all, if licenses are given to operate machinery and vehicles, or to prove that a person has undergone training on a certain area, why is it that individuals who have no idea about how to use a computer without risking a network have indiscriminate access to one?

Or even worse, why do those people who couldn't possibly care less about their own cyber-protection (or that of others) feel they have the right use a high-tech system they regard as some sort of an electric kettle and, in so doing, they compromise the safety of the Internet?

They should at least take a test with some easy questions to determine if it is less risky to have those people juggle with flame-throwers than it is having them turn on a computer. You know, like those tests that are published in magazines and newspapers to find out if you are cool, or if you are a nerd, or if one's habits indicate that one will eventually become a social menace.

Negligent computer users should take the test voluntarily in an attempt to assess their risk factor. The questions should be straight forward and, when in doubt, they should simply choose "yes".

I have collected some functional indicators from experiences with people around me:

1. You click on any link that you get by email as long as you recognize the name of the sender.

2. You plug in your USB drive and erase alerts without reading them because they bother you.

3. You can use your computer only because you wrote the steps to find your programs.

4. As soon as you see your computer acting funny, you call your techie friend to fix it for you.

5. Once the techie friend goes away, you generally blame him/her for all subsequent problems that your computer gives you.

1. You keep forgetting to close your Facebook or email session.

2. You get an email reading "My girlfriend got your pictures and sent them to your spouse. You are dead meat. See pictures attached". So, you freak out and open the attachment, which happens to be a zip file where the compromising material is.

3. You strongly believe that there wouldn't exist any viruses online if everyone had the same antivirus and they kept it updated.

4. You open every powerpoint presentation that your relatives, friends, or colleagues send you, regardless of the fact that the powerpoint icon looks funny and the file is called "presentation.exe".

5. You download bundled software from the internet and install it to your Windows computer without even reading the different screens.

1. You think that remembering passwords is too much trouble. Anyway, that's the job of the "computer people", not yours.

2. You never update the antivirus in your Windows computer because everyone else does. Anyway, that's also the job of the IT guys, not yours.

3. You strongly believe that your computer is OK as long as the system starts. All computers act funny, so it's not strange that yours also misbehaves from time to time.

4. You cannot run a specific program because a "moron" deleted the icon on the desktop.

5. You argue with people who do not support SOPA and PIPA, whom you call pirates. Then you go home and download a movie using this great Bitcomet thing that your teenage daughter/son installed to the home computer.

From 1-5 points: You are like a drunk driver roaming cyber-roads. Your license should be suspended until you learn a bit about how not to be a danger for others and yourself online.

From 6-12 points: You might not know, but you became a legend. Yes, you are (in)famous because every computer you touch starts failing "mysteriously". Do the world a favor and stop using computers until you understand the risks. License suspended.

13-20 points: In your case, danger is like giving a four-year old a loaded Steyr TMP to play in the middle of a wedding reception. You HATE computers and it shows. Keep away from computers; they also HATE you. Only cyber-criminals love you. Your license to use computers should be revoked immediately.

21 points or more: I don't even know how to put it. You should seriously consider to lock yourself up in an anti-chip bubble, so that it will become difficult enough for you to interact with a computer in the future.

But you insist and want to use one of those wonderful machines? Then go get Linux ASAP. Only Linux can save us from you.
en febrero 26, 2012 3 comentarios:

How to mount ISO images in Linux 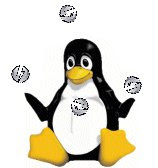 Back in my Windows days, I was very happy to work with virtual CD drives thanks to Daemon tools. The ability to play games and watch videos without having to place the actual CD on the drive tray was like magic to me.

Once I migrated to Linux, since the games I used to play were not supported, I forgot about mounting virtual drives.

Today, I learned how to mount ISO files in KDE: it's a real simply process that can be performed with the terminal or with a graphical tool.

Mounting an ISO file with Konsole

The first step is to create a directory which is going to be used to mount the ISO to. This is achieved by opening Konsole and, after typing SU and your root password, you type:

Close the terminal and use Dolphin to find the directory where the ISO file you want to mount is. Let's suppose it is called "your-file.iso". Once in the appropriate directory, go to the menu in Dolphin and click on "tools". Then select "Open terminal". Once again, type SU and your password. Then type:

And there you have it, Linux beginners! Your ISO will be mounted.

So you want to unmount the ISO? Well, in the terminal, as root, type:
umount /media/your-file.iso and then:
rd /media/any_directory (to erase the directory we created).

Notice that the command is umount, not uNmount.

Mounting an ISO file with Acetoneiso

If you think that the terminal is too much of a hassle, then you can use acetoneiso. Find it in your distribution repository and install it. Then, launch it from the menu and the first thing the program will do is ask you to select whether you use KDE, Gnome, or any other environment. After that, you yous have to select the file and click in mount or unmount. This program creates a folder called "virtual-drives", in which it makes numbered directories where your ISOs will be mounted to.

A notorious difference is that they are created in your home folder, not in root.
en febrero 20, 2012 2 comentarios: 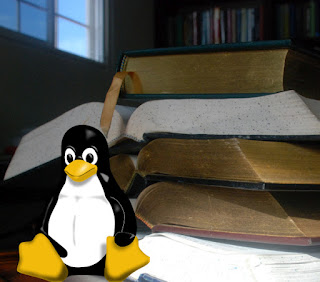 I have not been able to post here lately because I received an invitation to publish a scholarly article and, therefore, I got busy writing. I worked passionately on this project, sometimes getting up early to gather sources before my one-year old daughter would get up. You know, once she gets up, I prefer to play with her ;-).

The writing process went as usual. However, when I finished with the article, I remembered everything I did to complete my thesis back in the days in which I was an avid Windows user. I could not help it: I compared the way in which I worked then (with Windows XP) and how I do it now (with Linux powering my computer).

To be able to finish my thesis, I had to steal sleep hours; I would get up every day at 3AM for a month. My Windows computer helped me with the task: it would turn on by itself, load my thesis document, open my browser, and play a song to wake me up. Remember I am no computer guru. To achieve all that, I had to download several programs (and their corresponding cracks). No wonder my Windows box was always infected and throwing tantrums at me!

In Linux, I do not have to install anything for my computer to do all that: the OS includes all the functionalities I need. From KOrganizer, I get the computer to wake me up with a song and to launch Firefox and LibreOffice with my article without exposing my computer to any malware. I simply used the process for a song but selected "application/script" instead of "sound". Then I wrote libreoffice3.4 for "application" and added the path where the file was in "arguments".

But that's not all: Linux has a great tool for copying citations from PDFs: Okular. Its fabulous feature to select text from virtually any PDF, copy it, and paste it truly facilitates the process of adding citations to one's article. Even in the rare cases when it is not possible to get the selection as text, you can paste it as an image with Okular...simple and quick.

Oh, and the workspaces! They are so convenient; you can work without all the clutter. I kept a thesaurus in one desktop, the browser ready in another, some PDF sources in another, and my main document in another. This way, you just say good bye to the waste of time caused by the repetitive minimizing and maximizing of the wrong application.

Thus, when I hear all those silly claims of Linux not being ready for serious work, I chuckle. Waking up, doing research, formatting my sources, writing, proofreading... from nothing to completion, every step of the writing process was a lot more efficient thanks to Linux. I do not even have to worry about MS Office compatibility: the magazine accepts .odt files!

So, I finished this article pretty quickly. And the best part is that I did not have to sacrifice the time to play with my daughter.
en febrero 05, 2012 1 comentario: