You know, when an animal eats a poisoned bait in a sublethal dose, the said animal learns to identify the poisoned bait and avoids it.   This is referred to as "bait shyness."

This month was a bumpy ride regarding updates and, consequently, I think I developed some kind of update shyness.

It all started when I fired up Synaptic on PCLOS to update packages.  Normally, the process is completed with no hassle.  This time, however, there was a message about "broken" packages and, since I had never had broken packages before, I decided to log out and back in to see if everything was alright.

It was a poor choice.  The DE did not load, so I ended up with a black screen in front of my eyes and desperation all over me.  Fortunately, when I logged in as root, the DE was operational, so I fired up Synaptic again and fixed the broken packages.  That rectified the problem.

But the update madness had just started.  A couple days after the PCLOS incident, I booted OpenMandriva and Discover notified me that there were updates.  I must confess that the update process in OpenMandriva has not been easy for me: I prefer to use the Control Center, but sometimes it cannot install some packages and those have to be installed with Discover.  Sometimes, the latter simply refuses to load the package list.

In an attempt to circumvent the duality, I used urpmi instead.

I ended up with a system that refused to boot and had to reinstall from scratch.  Oddly, after the reinstall, the update went fine.  Go figure.

To finish my story, I started Fedora 25 and, again, Discover told me that there were updates. I updated confidently because Discover has never failed in Fedora.  The process seemed smooth and I went to sleep, but there was a surprise for me the next morning: Fedora was unable to see the wifi.   In fact, there was no kernel module for wireless connection at all!

I saw that the problem was that, by an unknown reason, Fedora had installed a very old kernel and was booting with it by default.  When I tried the advanced options and booted a different kernel, the wifi worked without a problem, so I specified this kernel in GRUB2 to boot it by default.

Curiously, when Discover updated packages again, there was no problem.

So, my distros are working fine now.

But I do get a bit anxious every time I see that there are updates.  Even so, it is comforting to see that the problems are temporary.
en marzo 17, 2017 2 comentarios:

Kdenlive and Audacity... A Powerful Combo for Education

The university where I work is pushing all professors to use a platform for online courses.

I am very critical of those learning environments because it is easy to claim that technology enhances education without considering the dark side of ICTs. 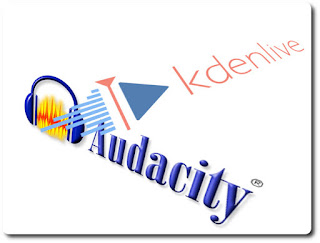 It was time to give the platform a try.  After all, the university is also advocating the use of FLOSS, so...

The creation of a virtual environment was rather easy, but to produce content is perhaps the most time-consuming activity.  Fortunately, my basic GIMP skills gave me a decent standing concerning the presentation of the different sections.

Then I decided to go ahead and produce a simple video. For this task, I selected Audacity (for recording/editing sound) and Kdenlive (for the video sequence).

I was expecting many problems because I am not an expert in sound/video.  In addition, it was my first time with Kdenlive.

The video-creating process was pretty straight-forward, however.  I got the still images and organized them to fit the sound track that I produced with Audacity and I never felt confused or got stuck; everything was intuitive.

Of course, my video was very simple, but I can say that Kdenlive and Audacity make a powerful combo for beginners who need to produce a quick video for a presentation.