And I thought I was daring!

Those who saw the 1989 movie entitled "Dead Poets 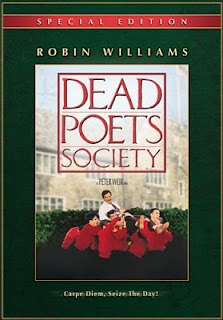 Society" might remember Mr. Keating's romantic words concerning "living life to the fullest". As the English teacher, he would use the powerful poetry of Walt Whitman and Robert Frost, among others, to urge his students to break out from the shell and be daring.

Yesterday, I posted an entry on how I decided to use Linux and Open Office in my yearly report presentation for the University Professor Assembly, and I really thought I was being daring then.

However, I realized that there are others who are far more daring than I was or could have been. How about risking your chances of finishing your studies in a graduate program to prove that open source software and Linux can be used in a demanding professional context? Read about this experience here.

It's not the same hearing a thunder and seeing lightning! 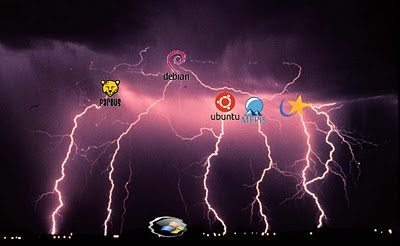 Last week, the Dean called for a Faculty meeting in which the only topic was, to the dismay of those who claim Linux is dead, Free Software!

With this meeting, it's the second time in two months that professors hear about the existence of something that is not Windows and the University's ongoing plan to migrate to open source.

I wanted to post about that, but I was preparing my yearly report for the Professor Assembly and, therefore, had no time... but it occurred to me that I would use the chance to contribute by showing all professors how a computer running on Linux works. So, although they had a Vista 7 Starter laptop ready for the reports, I asked permission to use my modest netbook running Mandriva.

All my colleagues displayed their reports using the Vista 7 laptop and one professor suffered the embarrassment of MS PowerPoint 2007 not responding as she expected. I cannot say that was an "atypical behavior": all of us have seen something like that happen time and again. I felt bad for her due to the fact that she told me that she slept till late because she invested a lot of time to create a beautiful PowerPoint presentation for the occasion.

When my turn came, I had my netbook ready and woke it up from hibernation (Yes! It DOES work in Mandriva 2010.1), unplugged the VGA cable from the laptop and plugged it to my netbook. As a good OS should behave, Mandriva picked up the signal and let me configure the display in a matter of five seconds. The picking up of the signal made me a little anxious because, prior to the meeting, they had to change the projector because 7 Starter did not let them change the display size of the screen (How about that!) and I had everything ready with the previous device.

However, my Linux OS did not let me down and all the people laughed when they saw my Cosmic Cat wallpaper on my desktop # 1.

Of course, they gasped when I turned to desktop #2 and my presentation, made using Open Office, was there, ready. The beautiful OpenGL transitions made the ones in PowerPoint look like sorry excuses, especially after I said "This is the free software that the Dean is trying to promote", moved to different desktops to display other information, and returned to the presentation via Kwin Cube.

After my presentation, which went without any problem (wasn't Open Office "unprofessional" according to the MS video?), the professor who was embarrassed by MS Office 2007 borrowed my netbook to play with it for a while and loved the behavior of Linux.

Yes, seeing is believing. Now, my colleagues have seen a computer running open source software in the most demanding of contexts... and it neither got stuck, nor was difficult to operate. Oh, and it didn't blow up, either. Can you guess what software was proven to be unreliable?

For many of them, the thunder might not be as impressive as lightning. Now they have seen the truth: Linux can run flawlessly on a netbook and they were impressed. Many people are becoming aware that they can work in a more beautiful way by using Linux than by settling down with an OS that gives them the same problems year after year.
en noviembre 27, 2010 3 comentarios: 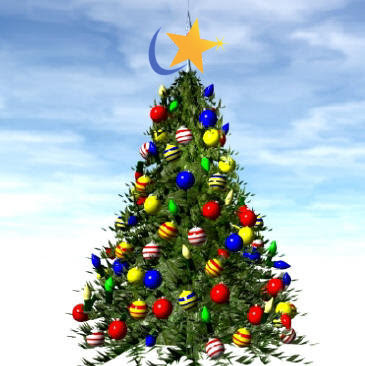 These cold winds have brought some good news for Mandriva users: Mandriva will release version 2010.2 of the distribution as a Christmas present.

They claim this release will polish 2010.1 Spring (Farman) and will fix certain issues. Additionally, the company announced the schedule for the development of Mandriva 2011 (to be released during the end of May, 2011) and changed the two-release cycle to only one per year.

As Mandriva is my favorite Linux distribution, I can hardly wait to test Mandriva 2010.2. Of course, I'm also supporting the Mageia project and will settle for the one I find the most useful.
en noviembre 16, 2010 3 comentarios:

In my perennial quest to find the perfect Rescue distro, I downloaded and tested Linux Mint 10 (Julia) and I must say that I was very pleased by the way it performs.

I downloaded the image (it does not fit a CD, so you have to burn it to a DVD instead) and ran the Live mode.

After 1:15 had elapsed, I could see the well-known Linux Mint logo as a splash screen. For those who are not familiar with it, Mint features green as its trademark color, which is not strange for a distribution that is made in Ireland. It took 2:15 to show the desktop and an additional 15 seconds to use it and I was surprised by the desktop wallpaper.

Interestingly, Mint's desktop moved away from the green freshness that originally attracted me to the distribution: the new look is darker. You get a black wallpaper with shades of gray: 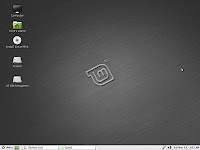 That shocked me at the beginning because I've been following Mint since the seventh release, and Gloria, Helena, and Isadora all paraded wearing green clothes. Of course, if you dislike this darker look, you can easily change it and set any of the good many green Isadora wallpapers. Gloria's default wallpaper is also there in case you are trapped by nostalgia. All of the wallpapers are tasteful and beautifully designed.

Julia's somewhat Gothic appearance, however, is no omen of poor performance. As a matter of fact, this Live DVD comes with everything you might need for using it as a rescue distro: it has Brasero (for burning media) and mounts your Windows and Linux partitions without any problem. It also lets you delete files from Windows (not from Linux) and works with audio and video out of the box. I tested .flv, .mpg, and .mp4 formats for video and all of them worked flawlessly. As for audio, Julia beats Ubuntu Maverick Meerkat because it gives you the preview of MP3 files by hovering over the icon out of the box.

Julia comes with Open Office, a dictionary, and several applications that might help to finish your pending office work you if your computer acts up. For localization, you must install the distribution. The process does not seem difficult, nevertheless.

Concerning the Internet connection, it picked up my cable connection automatically, so I browsed the Web for a while with Firefox. I also set up an IM account with Pidgin and everything went up fine.

This is certainly a great rescue distro: easy to use, responsive, elegant, and functional. The only flaw I found is that it does not fit a CD...which is the same case of the alpha release of SimplyMEPIS 11. Is Linux moving to Live DVDs instead of Live CDs?
en noviembre 13, 2010 2 comentarios: 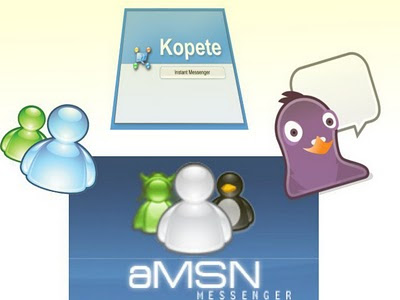 Most Windows users are familiar with MSN Live Messenger, which they call "the chat program" (not accurate technically speaking because MSN Messenger is an instant messaging (IM) service, not a chat). They believe that it is the only way you have to communicate with friends who are away if you do not have Skype.

However, thanks to the proliferation of botnets and MSN viruses, Windows users might have noticed how their sessions with MSN are plagued by unwanted messages ("See this video", "click here for an offer", blah, blah) and by unreliable log in time.

When I migrated to Linux, one of the first things I discovered was that you can keep using MSN Live although you are not running Windows. You do it with one of the many Linux IM clients...and the beauty is that you do not get the problems that are associated to MSN Live Messenger. You have to learn to compromise, though, as their functionalities are different. 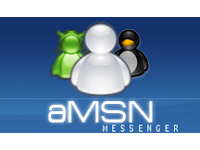 This program is an MSN Live Messenger clone. It can enable video calls, but not conferencing. For those who like IM with a cam, this is a good option. I have tried it from Mandriva to Mepis (Linux-Linux) and it works. The cam feature does not seem to work from Mandriva to Windows, but it is OK with me because I was never fond of the video cam sessions anyway. As MSN Live Messenger, this IM client works only using MSN network. That might seem obvious, but I said it because most Windows users think that they need an independent program for each different account they have. So, most Windows users have a program for MSN, Skype, etc. 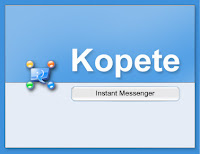 This is the default IM client in KDE. This Linux program is simple and supports many more accounts. One interesting feature is that this little program lets you know when one of your MSN contacts is in invisible mode: that's right, no hiding from the eye of Sauron. The problems: no video. 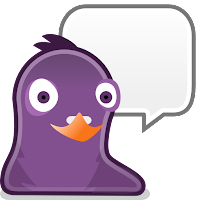 This is a simple but extremely powerful IM client. Because of the possibility to extend its functionalities, this IM program can control your MSN, Yahoo, and even your Skype account without any hassle. Yes, you log in and you can communicate with all of your friends and contacts with this little thing. It also has a fun feature called "psychic mode" that lets you know some seconds in advance when one of your contacts is typing a message for you before he or she sends it (you read something like "You perceive a disturbance in the force").
This program can also run in Windows. Again, it does not support video but for that's fine with me because I like IM to be fast and reliable. Video is a nice add on, but not an indispensable one for communication.

As I said, the IM experience in Linux can be a little different if you learn to compromise: there are features that you don't get, but there are many others that you were not even aware of and that might enrich your IM sessions, such as data encryption, effects, plugins, etc.
en noviembre 07, 2010 4 comentarios: