It is official: Mandriva S.A. is being liquidated (in French).
After a long struggle, Mandriva S.A. comes to an end on June 2, 2015 and, with its demise, the venerable Linux distro that made me migrate from Windows also disappears.

I think that it is sad that the Mandriva star twinkles no more in the OS universe, but it is good that other distros can continue with its legacy: Mageia, OpenMandriva Lx and, up to a certain extent, PCLinuxOS.

This is the way of life.  Nothing stays forever... What a weird coincidence that I am dressed all in black today.

Many things have changed since I first used Mandriva.  Some of those changes were for the better, some others were not.

Now let's see what else the future brings.

This blog was created on May 21, 2010.  Because of the author's commitment to sharing his knowledge about Linux, I have learned many useful tricks.

Thanks to this blog, among other things, my daughter enjoys a computer with PicarOS, my wife played games like Passage, and I learned how to configure GRUB for multiboot.


Megatotoro writes about fun and crazy stuff, as having a Buddhist cow in your computer, or about bold experiments with Linux in stressing situations.  One thing is sure: the writer in the corner of migration to Linux has never been afraid to toe the line when trying the new resources that FLOSS offers.

May you continue posting for many years to come, Megatotoro! 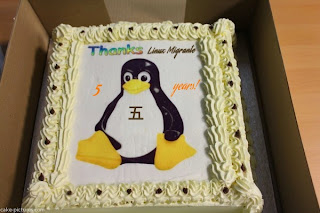 I wrote before how Firefox OS reconciled me with mobile phones.

My experience with the ZTE Open was so good after I upgraded the OS to 1.1 that I decided I wanted to get version 1.2.

Instead of getting enough information, I grabbed outdated instructions to install an old 1.2 image... back then, it was a pre-release version of Firefox OS 1.2

The process was smooth and I got a new interface: 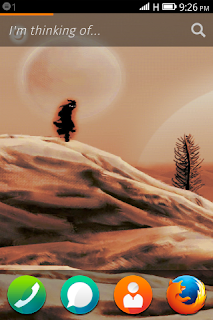 I was very excited  when I saw that some of the regular features of a smartphone has were at last operational with this upgrade, such as microphone recording, contact storing, etc.
The clock was redesigned with more functionality: it has the alarms, a practical timer and a useful stopwatch all in one. 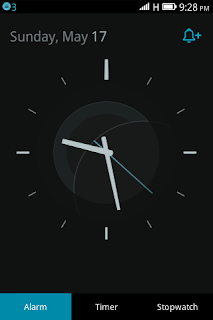 This new version also allowed me to create functional music playlists... but with the new system, my problems with the ZTE Open phone began.


I know that it was actually my fault for installing a pre-release image. So, I could not receive updates and certain apps stopped working.  One was ConnectA2, the WhatsApp equivalent.  There were other apps that could allow me to access the WhatsApp network, like Loqui IM or OpenWapp, so I did not worry much.

But  Run, Bike, Hike, HereMaps, and all apps that needed GPS were misbehaving.  The reason: GPS was simply not working!

This GPS problem was a show-stopper.  I tried to revert to Firefox OS 1.1, but the process did not work.  I tried everything to no avail; I was stuck with this version of 1.2.

That's when I decided to buy the Alcatel One Touch Fire C, the only phone they sell in my country with Firefox OS.  I was a bit reluctant at first since the carrier that offers the phone is Movistar, a Telefonica-owned company.

Last Monday, I bought the phone anyway.  I must say that I am very pleased by its performance and very cheap price.  One can swap the SIM card to use the phone with another carrier here, too.
These are the specs of this affordable smartphone:

They are not bad for a basic smartphone.  The Gaia interface is pretty and responsive and I installed the apps I need from the MarketPlace.  In so doing, I noticed that ConnectA2 was not working, but it was not a big deal: I could access my WhatsApp contacts through Loqui IM.
Although this phone does not have a compass, I liked that Firefox OS 1.3 offers more customization options: you can now select your favorite song as the ringer, you have more control over the updates, contacts, and calls, and the battery does not run out of juice as fast as it does in other phones.

My main complaint is the color: I would have preferred it in Mozilla Orange... but this phone satisfies the strange requirements of a mobile phone hater like me ;-)