I read this article today.  Apparently, Windows 10 users will be able to choose if they want to grab updates from PCs over a private network or, more disturbingly, from the Internet.

To be honest, I don't know why the author thinks users will love this P2P "feature".  All he worries about is the --very real-- potential risk of hackers getting new toys to play with.  However, I think he missed a very significant point, one that affects clients directly.

With this P2P updating idea, Microsoft can put the burden of the downloads away from its own servers (where it should be located) and re-locate it on the machines of its customers.

This means that the customer's PC will become slower as it will serve the updates to another client.  And who pays for the upload?  If my machine is uploading, it is using the internet connection that I pay for.  In other words, I am not only letting Microsoft use my machine to relieve the burden on its servers, but also letting this abusive company use my internet connection for free.


"Yes, Microsoft, come use my resources with no benefit for me and, while you're at it, please charge me a yearly (maybe monthly) subscription to use my own computer!  I will love that!" 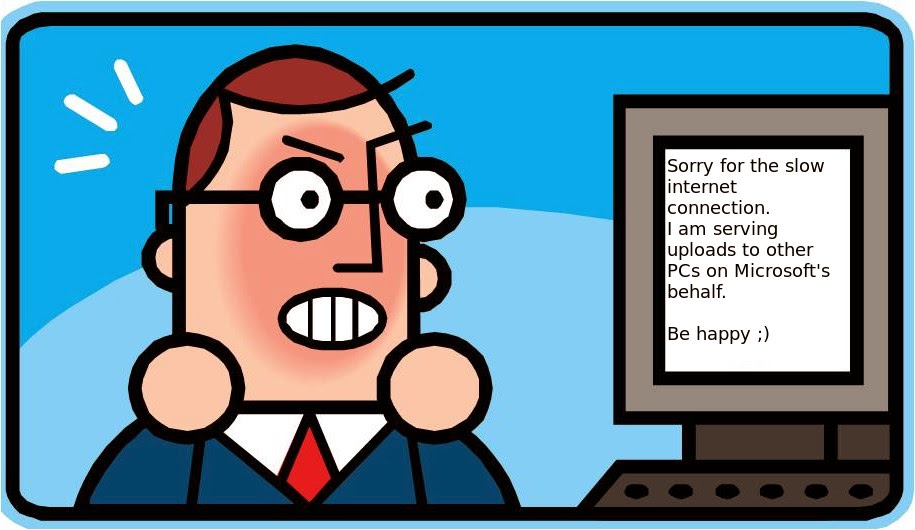 What kind of a deal is that?  Why should Windows users be happy about it?

The only thing I am happy about is that I DO NOT USE WINDOWS, so that this abusive company cannot reap me off so shamelessly!
en marzo 16, 2015 1 comentario:

The Red Fish, a Story of Success

When I first tried out PicarOS, there was a link to a site called "Poisson Rouge".

Given the fact that PicarOS is a Linux distro that specializes on children, it was no surprise that the site had content for children.  What I did not expect was that the crazy flash games on the site were so attractive to young children.

I mean, the activities are simple and repetitive.  Yet, young children love them.  And best of all, everything was free; Poisson Rouge subsisted selling merchandise.

One day, however, I visited the site and got a sad announcement.  Poisson Rouge enjoyed a heavy traffic, but costs were too high and the site was on the verge of closing.

I remember the pain piercing my heart like an arrow.  As an adult, and mostly as a parent, I appreciated the artistic and educational value of the activities in Poisson Rouge.  It had become part of the fun time my then two-year old daughter had been experiencing with the computer, but all the songs, dancing images, and discoveries that brought laughter to my girl were about to be gone forever.  I really felt bad. I am not exaggerating.

But how do you save a site that is condemned already?

There was something new.

It was a message informing users of an idea to save the site.  Poisson Rouge had a chance to survive as long as enough users were willing to pay a yearly registration fee.

Yes, I know many people may think that it was the proof of absolute stupidity.  Why paying for something that was free before?  After all, similar content should be available somewhere in the vast Web, right?  Who would be dumb enough to pay?

Well, call me stupid then.

My daughter, and many children, I'm sure, are happy that the site is alive.

Does this contradict my beliefs regarding free software?  I don't know.

I am a weird kind of person.  I paid for the Mandriva Powerpack. And I did that several times.

I have paid for games in Desura, Steam, and The Humble Bundle.

I have also donated to other Linux distros and projects. I even donated to be able to install a beta of Elive.

Heck, I will pay for Elive when it's finally ready.

Yet, I cannot pay a subscription to MS Office or Windows.  Why?

Because I don't believe in those products.

Microsoft lost my trust long ago.