The reason why I jumped into the Linux train was a tiny Asus Eee PC 900 that I bought in 2007.  This 8.9 inch netbook came with Linux pre-installed and I intended to change the OS to Windows XP, but the latter made the netbook a real snail.  In addition, my wife had already grown fond of the cute Frozen Bubble game on Xandros, the netbook's original OS, so I went back to Linux, but put Mandriva on the machine instead.

It was an amazing little machine that helped me get my tenure at the University where I work, but that I gave away later to a person who needed it to keep studying.

Last month, by pure serendipity, I saw another Asus Eee PC 900 sitting on the display window of a computer repair shop.

I bought it for my daughter, expecting to change the Windows OS to Sugar since her school decided not to lend the OLPC XO computers for take out.

Even though I had my pendrive ready with Sugar, my plan did not work because I failed to consider that the machine is very old and, hence, its architecture is 32 bit.  Most Linux distros abandoned 32 bit to concentrate on 64 bit.  Sugar does not support 32 bit.

I put old Mandriva 2010 on the HD and, sure enough, the netbook came to life with Linux.  There was another problem, though.  When I tried to watch Youtube videos, Google told me that the browser was no longer supported and urged me to upgrade to a more modern browser.  I checked Firefox and... it was version 3.5.3!

Of course, getting a more modern Firefox from the repos was impossible as Mandriva repos went to nothingness.  It was a dead end.

Then Megatotoro reported that PicarOS was out.  PicarOS is a fantastic Linux distro that is designed for children and my daughter loves it.  Besides, this beautiful OS has a small system footprint, so it was a good option because it still supports 32 bit architecture.

I downloaded the PicarOS Diego 2017 image and, using ROSA image writer, a great USB live OS creator, stuffed it to a 4GB pendrive.

Although the OS booted perfectly, the installation was problematic.  I tried the advance mode and, after completion, the machine simply showed a GRUB error.

I tried the automatic mode.  No luck: the netbook did not boot.
I tried the manual mode.  Same problem.

I booted it live and, starting to feel defeated, looked for another install method.  In the menu, under Minino Tools, there was this suspicious entry that I had not seen in PicarOS before.  It was for copying the system to an USB or HD, it said.

I tried it.  when prompted, I selected the HD of the netbook and waited.... and waited. 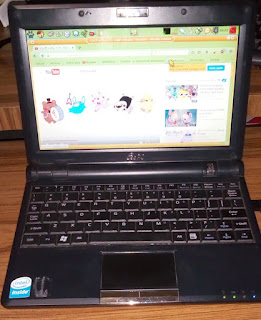 A window with a progress bar was there.  The window read "Oh. The /usr folder is so full of things!"  After a while, the message  changed to  "Less work to do now" until it finished copying.  I really appreciated the humor.

When it was done, I rebooted more confidently (perhaps thanks to the humor?) and... GRUB was there, offering me three options: 64 bit, PAE, and 32 bit.
I selected 32 bit and PicarOS Diego became alive!

The tiny machine has everything one needs to work and play.  And it loads YouTube videos, too!


My daughter, Eimi, liked it a lot.  She got a bit disappointed when I told her that the little machine does not have enough power to play Among the Sleep, her favorite Steam game. 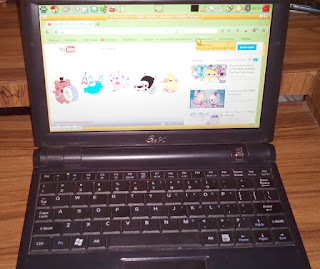 However, she was very satisfied when she could practice her reading using GCompris and got a perfect score, hehe.
PicarOS is definitely a great OS for children.  It is too bad that not many people are aware of its existence.
en mayo 05, 2017 1 comentario:

Another Year on the Blogosphere

This blog came to life on May 2, 2010, as my humble attempt to register each step, however minimal, that I took in my journey as a new Linux user.

I had started using Linux a bit earlier (2009), thanks to an Asus Eee PC 900 that came with Xandros Linux pre-installed.  I did not like the OS, but decided to give Linux a chance after the complete failure Windows was on that tiny netbook.

I changed the OS to Mandriva 2009 and so I became a full time Linux user.  No one asked me to migrate; I came to Linux by myself.


Seven years have already elapsed!  Seven years in which I have used my computers without worrying about viruses, of seeing computer myths exposed, of watching the world spin from a different standpoint.
Distros have risen and fallen; desktop environments have evolved, forked, and gone are certain bugs that annoyed me, along with features that I loved.
People that came across in this virtual world have died, too.  And projects that inspired me are disappearing, swept away by the ceaseless tide of time.
In the middle of all this, hope springs eternal: I have seen other non-technical computer users like me abandon their fear when they sit in front of a Linux-powered system. Ah, and there's also this girl who was born six years ago, surrounded by Linux computers... If OSs were languages, she would be trilingual!