The story of Eimi's HD failure

My daughter Eimi loves computers ("pah-teh", as she calls them). One of her favorite activities is to turn on her desktop PC and take me to it to play music videos.  This PC runs Mandriva Desktop 2011 and, thanks to the convenient ROSA Time Frame, Eimi, bouncing on the chair with joy, simply points to the enlarged icon of the video that she wants to see.  Sometimes, she utters a word to identify the video.  For example, Robert Palmer's "Simply Irresistible" is "mamá", Totoro's song is "toto" and, to my distress, Eimi never fails to identify the clip of Mr. Bean dancing "Mr. Bombastic" as "papá".

We were watching some YouTube clips when the computer rebooted and the OS refused to launch.  It turns out that there was a power surge and some sectors of the HD fried.  Yes, it was my fault because I forgot to replace the old PSU unit.

Luckily, I could reinstall the system to a different partition in less than 20 minutes...that was the Windows partition, but Eimi will not miss that OS, I'm sure :-)

Many Linux users have already proclaimed Mandriva deceased and buried it. But is this old Linux distro quite dead?  Well, yes.  Sort of.  Mandriva became a zombie!

That is, at least, what some developers have implied with the release of the Mandriva 2012 Tech Preview: they code-named it "Bernie Lomax", the famous character of the comedy "Weekend at Bernie's".

I know that Tech Previews are not targeted to end-users but, stung by curiosity, I gave the DVD a test drive.  I must confess that the distro, just like Bernie in the sequel of the movie mentioned above, still moves, dances, and even fights! 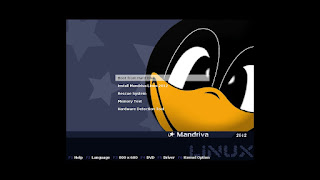 First, the DVD booted flawessly when I installed to a virtual machine.  However, I had to give it more disk space than the average 8GB because the DVD included a lot of packages (it asks you if you want an office workstation, a gaming PC, etc).  I chose a KDE desktop install.

The installer is the same that was included in the Mandriva Desktop 2011.  The artwork, however, has changed: there was a bunch of friendly-looking penguins that kept me company along the way until the installation process was complete and the machine rebooted.

From that moment, my question was if Mandriva would follow the line established with the 2011 release (ROSA SimpleWelcome, launcher, Time Frame) or if it would go back to the 2010 feel, now donned by Mageia.  The answer came soon enough.  When I say "soon", I mean it: the desktop became operational much faster than with the 2011 and the latest ROSA releases.

Once the desktop loaded, I opened Mandriva Control Center to give this Linux distro release wannabe my mandatory test: Japanese IME capability.  I had chosen iBus as the IME during the installation, but I had to download Anthy and some other packages from the repositories.  "Bernie Lomax" passed the test; it can handle Japanese input with iBus+LibreOffice perfectly.

I have to say that although the ROSA stuff is not my cup of tea, when I saw its responsiveness here, I found it more appealing.

So there you have it: Mandriva is still moving after being proclaimed dead.  Now we have to see if the corpse finally rots or if a new, more vigorous distro is reborn from its ashes, like a phoenix.