It's no secret; Mandriva S.A. faced difficult times and improving the company's poor interaction with the community is the latest goal they have established.  In the meantime, developers, users, and forum admins have gone (Farewell, Germ, and thanks for all of your work!).

As a Mandriva user, I am concerned because I would not like this beautiful distro to disappear.  However, I haven't heard of a new Mandriva release soon.  Mageia and ROSA, the two divergent lines of the continuity of Mandriva Linux, are buzzing with activity.  For the ones who are not informed, while Mageia 1 kept the line of Mandriva 2010.2, ROSA is intending to keep the line of Mandriva Desktop 2011.

When Mageia 2 Beta 3 made its appearance in the Linux landscape, I tested it and was satisfied by its new look and use of KDE.  In addition, the Japanese IME was working flawlessly, so I was very pleased there even if multimedia needed some tweaking to run properly.

ROSA, on the other hand, has unveiled its new release candidate of Marathon EE (EE is the version including non-free stuff, like the extinct Mandriva ONE). I downloaded, gave it a run in Live mode, and this is what I found:

ROSA presents some animated bars as the Live environment is becoming ready to launch.  After a while of waiting (the wait was shorter than with Mandriva Desktop 2011, I must say), you are greeted by this desktop: 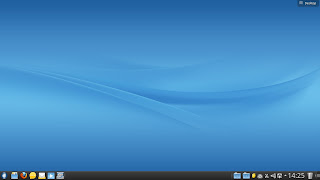 It is very responsive for a Live CD and the Spanish localization is very good.  The most obvious change is the indicator of the KDE desktop.  When you clic on the ROSA button, you see the well-too familiar ROSA launcher and SIMPLE WELCOME found also in Mandriva 2011: 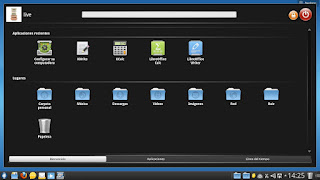 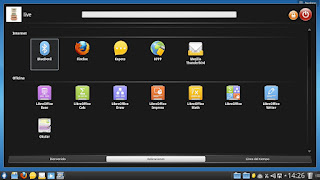 You have a ROSA sync icon, but I noticed the lack of software for a distro this size.  I mean, you get a full LibreOffice suite, but in graphics or multimedia, the options are scarce.  However, the ROSA player is promising: 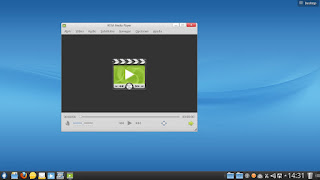 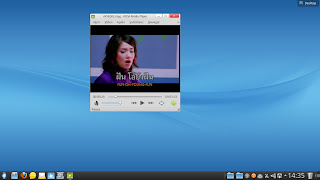 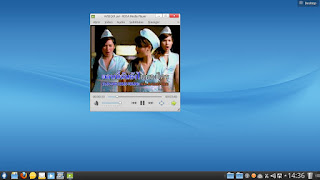 The ROSA player works well with mpg and avi video but, when playing mp4's or flv's, there was no sound although it displayed the video.  This was curious because YouTube worked fine out of the box.

ROSA Marathon EE also recognizes and mounts all the partitions on the hard drive in Live mode.

On a different note, the Mandriva influence is visible.  For example, to configure the system, you type MCC (Mandriva Control Center), not RCC, and the ROSA control center opens: 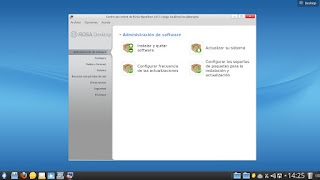 Overall, I think that this is a heavy system, but it is beautiful and usable for newbies.  ROSa is beggining to capture some attention in the world of Linux, too, as seen by its quick moving up in the DistroWatch chart.  I wonder if there is a ROSA community, though.

Now I will wait for the Mageia 2 RC to run a comparison. 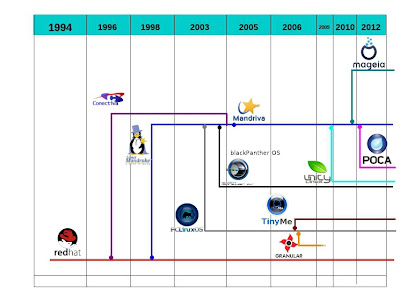 Yesterday, DistroWatch.com made it public that the beta 1 of ROSA Marathon is available for testing. This distro is a new fork of Mandriva.

Interestingly, after one day of being released, ROSA is now in the 11th position, trailing Mageia (#8 in DistroWatch).

In the Mandriva forums users speculated that ROSA is the future of Mandriva. Since the company has not provided any fresh information (except for the "interesting news" without details in a forum post last March 8th), one cannot help but wonder.

Anyway, I downloaded the .iso and, sure enough, ROSA Marathon beta1 is like the twin sister of Mandriva Desktop 2011. Of course, this is no coincidence because the developers at ROSA Labs worked with the Mandriva devs to launch the last Mandriva product there is today. However, the resemblance is absolute: this distro's booting sequence shows no difference at all (well, the logo is different), ROSA has a ROSA Control Center that is identical to Mandriva's (the icon is even the same!) and, to be honest, the only different features I saw were:
1. More polished icons (ROSA logo as a launcher)
2. The ROSA player

I admit that I did not use it much because the interface is not my cup of tea, so I'll give it another run later.
en abril 08, 2012 1 comentario:

Ubuntu used in a video about viruses? 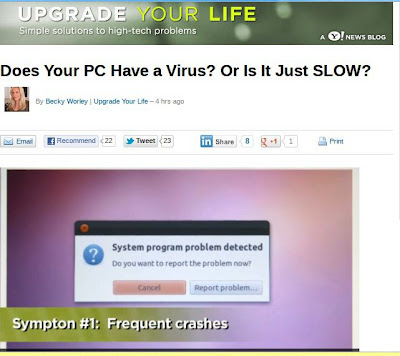 I was bored yesterday and this Yahoo! feature got my attention. It is about how tell if your "PC has a virus".

I might be mistaken, but the image they used to illustrate the first symptom of those annoying virus infections that plague Windows users seems to have come from... a computer running Ubuntu!

If that's the case and the illustration was used unknowingly, the reporter really needs to evaluate her sources.

However, if it was used intentionally, then "frequent crashes" in Ubuntu are being used as a misrepresentation of virus infections... For what purpose, I ask?

A very short time after both my brother and I migrated to Linux, we began experiencing the frustration of seeing the reality of the computer world: lazy technicians that charge to destroy your data, incompetent tech support staff who think that Linux is an anti-virus, unscrupulous companies that avoid their responsibilities and blame their helpless users by chanting their eternal mantra: "Your computer must be infected"...

Particularly, dealing with tech support became so unproductive that, once you abandon the rosy all-computers-have-the-same-applications mirage, it is a lot more effective to learn to solve problems yourself unless, of course, you luckily find an individual who really knows about computers. I guess this comic strip summarizes it all.

When I read it back then, I found it amusing because I could identify with the character having the problem with the modem. However, it was until yesterday that I could grasp the full impact of the comic strip; I had a dream that made me experience the level of frustration of the character.

In my dream, after running some updates for my Linux box, I was greeted by the most advanced desktop concept ever designed. Lean and mean, its jaw-dropping effects and futuristic features made me rub my eyes in disbelief: multiple workspaces with activities combined into "pages" of something called "Book", natural voice text synthesis, voice command input in multiple languages, an ultra-cute Foxkeh agent plasmoid retrieving Web pages....and the computer had bullet speed! As I was witnessing the system's amazing responsiveness, all that crossed my mind was "KDE really did it this time. I gotta show this to my brother!"

And there was this swirling, flashy 3D button in the middle of the desktop. When I clicked it, an alarm went off and a song started to play. Impressed, I thought, "Whoa! Cool! It's the same song I selected for the alarm I configured to wake u..."

No!!!!! I woke up. My palm went to my forehead: I was frustrated beyond words...