On November 21, 1995, the announcement that there was a program for image manipulation was made.

I am not a professional image designer.  However, as a teacher, one frequently needs to modify or enhance a particular image for a presentation.

Adobe Photoshop is heavy and too expensive.  I used to resort to an assortment of programs that included Irnfanview and Satori, which I could use for free and that satisfied my humble needs.

Then I migrated to Linux and discovered The GIMP.

With it, one can resize images, modify colors, change backgrounds, enhance pictures, create effects, you name it... It is, truly, an amazing program.  In general, every time I have to work with images, I look for this reliable software.  Perhaps batch conversion is the only operation that I prefer to do with other software (Gwenview).

And I've noticed that The GIMP has two points of controversy:  first, many people object to the acronym because of the offensive connotation of the resulting word.  Second, there seems to be an ongoing debate between the Gnome and KDE communities concerning "the way of the desktop" and The GIMP is in the middle.  Gnome strives for simplification while KDE presents lots of options...and The GIMP does not seem to follow Gnome's motto. 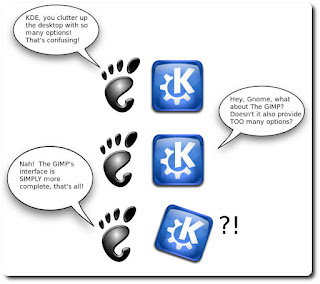 But let's not spoil the party.   The GIMP is here and that's the reason for the celebration!

The Astoria Dilemma... in Images!

These last weeks have been pretty stressful.  So, taking a break form my work, I decided to do something to take my mind off of everything.... 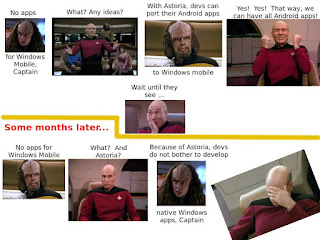 I have been experiencing problems to attach files larger than 200kb to emails.

I don't remember when this started happening but, since I normally do not work with files that large by email, the thing was nothing that a minor nuisance to me.

Today, when trying to find the root of the problem, I got side-tracked and ended up stumbling on a happy discovery.

You see, back in 2008 or so, I had to give up my favorite Windows game: Tomb Raider 4 "The Last Revelation."  This was not caused by my commitment to Linux (I did not start using Linux until 2009), but because a Windows XP update made the game crash.

Then I migrated to Linux and playing Tomb Raider again became a lost hope.

I did not remember I owned a Tomb Raider Chronicles DVD.  Well, I installed it with WINE on my desktop with PCLinuxOS and, after changing some settings... I could play with Lara Croft again! 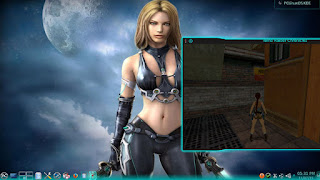 I never played Tomb Raider Chronicles on Windows.  Like I said, I did not even remember I had the DVD, so I was excited to hear familiar tunes and, like a child with a new gift, I did not worry about the playability of the game.

I will go back to the game on vacations.  Right now, and after all this time without playing Tomb Raider, I was satisfied with having Lara run around, walk, climb, jump, and shoot---on Linux!

What happened to Mepis?

My Linux migration story started in 2009, when I bought a tiny Asus Eee pc netbook pre-installed with Linux, a version of Xandros that I did not like much.

In trying to replace it, I had my first encounter with Xubuntu (no wi-fi support), Debian (minimal shell), and Mandriva, which I installed because it supported wi-fi out of the box.

My brother, Megatotoro, decided to find a Linux distro more to his liking and chose Mepis.

Mepis became the distro of choice for rescue purposes: in live mode, it was perfect to get inside a misbehaving Windows install and retrieve important files.  However, after we abandoned Windows for good, I could see that Mepis could shine with its own light, not just because it was a great rescue tool to have around for those frequent times in which Windows failed.

With Mepis 2011, Warren Woodford, the creator of Mepis, achieved a beautiful polish and rock-solid stability.  I never understood why this distro was not so popular in the DistroWatch ranking.

Then, the development of Mepis stalled and Warren Woodford went silent after a communication on November 5th, 2013.

This happened exactly two years ago.

Mepis is now marked as dormant in DistroWatch.

Of course, the Mepis community has been active all this time.  While some have switched distros, others have stayed.

The fusion of the Mepis and the AntiX communities originated MX Linux.

I learned today that there is a project on Crowdsupply.com that is attempting to redefine the way one uses a keayboard.

This design integrates typing, pointing and clicking, and ergonomics.  In other words, it works as a keyboard AND a mouse for your computer (in addition to being compact, but expandable to fit the most comfortable position for your hands).

How?  Well, it splits in two and works with programmable layers/macros to make sure you can do everything a conventional keyboard does... and more. 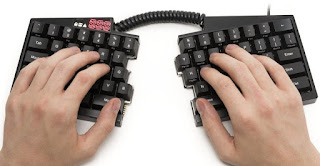 Oh, yes, the UHK also supports Linux and gives you the option to show it is YOUR Linux keyboard by not having the Windows logo in the super key.

This whole thing sounds kind of crazy, but I have to admit it is an interesting idea.

Visit this page to see it in action.