OS representations and the choice of migration 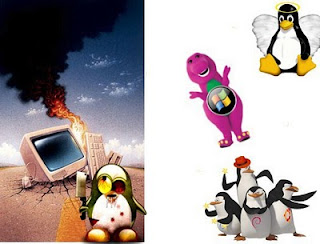 I have noticed that there are several representations of Linux and Windows that are used to dissuade people from migrating. Unfortunately, an uninformed migration normally ends up in disappointment and, as a result, hurt people resort to disqualifying depictions again in a never-ending circle. I decided to list some of those representations here as a reminder of the fanboy spirit that rests upon the pedestal of prejudice.

Many users, blind because Windows constitutes their only experience with an OS, simply reject the opportunity to try Linux. Their perception of satisfaction has been dulled by years of exposure to the same problems, to the point that they just accept those shortcomings as "natural". These people are not to be blamed, though. After all, when one is immersed into a paradigm, rarely is it that one questions the nature of the experience one is going through. So, as major security flaws and abusive policies become the air these people breathe, they consider themselves satisfied if they can obtain an "additional feature for free". I cannot but think of MS Security Essentials because these people fall for deals like those you see in TV offers ("If you buy the hair styler now, you get, completely free, the power cord!") or they are even willing to pay to unlock OS features that were previously given to them (wallpapers or language packs in Windows 7 Starter, anyone?). Yet, they think Windows is their loving friend...A friend that rips them off time and again...But they are happy!

MS evangelists do train people to bluntly reject Linux. This is not a myth; I had an encounter with one of those brain-washed professionals once and she tried to disqualify Linux even though Windows made her look like a fool during her presentation.

When you mention the word "Linux" to these individuals, they cringe and gnaw wildly. It is true that they have no practical reason or criterion to badmouth the penguin, but they do it just the same because it is part of their creed. I suppose that they sing:
"Mine eyes have seen the glory,
of good, old Microsoft.
It is trampling out the kernel
where the Linux code is stored..."
or something like that before they are sent to the world. These people are self-deluded and become irritated if they see Linux succeed in public...especially if Windows failed at performing the same task.

"Break the shackles of tyranny! Go Linux!," cry out certain people for whom Linux has become the solution for computer problems, social injustice, environmental disasters, and metaphysical concerns. They are the Linux equivalent of the MS evangelists I described above.

Let us be realistic: yes, Linux can give solutions to a number of computer-based concerns and it can make your computer more appealing and practical once you know how to work with it. However, if you believed that Linux is the promised land, then remember there was a long pilgrimage on rough desert terrain to get there. This applies particularly well to Windows users who simply grabbed an Ubuntu Live CD and installed Canonical's distro thinking that it would magically read all hardware (something that Windows cannot do, either, unless you have the drivers) and, after banging their heads on walls, they curse ALL Linux distributions today...or Mandriva users who update to Cooker and wonder why the computer is not working as it was before...Yes, believe it or not, there are people who actually do that and later blame Linux!

For these beginner Linux users, Linux represents an all-mighty fortress that stands impenetrable. Consequently, they engage in all sorts of risky on line behavior. While it is a fact that Linux is more secure than Windows is, the hubris of these tragic heroes gradually leads them to their destruction...or to the bitter realization that a great many of the attacks a computer can suffer are fostered by a careless user.


Fanboys always wage wars based on prejudice. Regardless of the OS you like, an open mind will help you fly over the clouds of ignorance and, eventually, you can make a conscious choice about whether or not your OS satisfies your needs or if a migration is the solution to your computer woes or the beginning of them.
en octubre 01, 2010