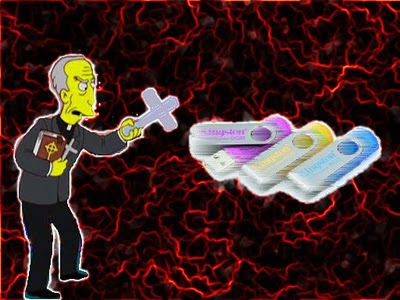 A rather curious phenomenon has been occurring near campus lately: vendors are refusing to distribute USB flash drives, those handy devices for storing data. The first time I got a "NO, we don't have USB sticks" as an answer, I thought that the vendor had simply ran out of stock. However, time passed by and flash drives were not available. Not even one. What was going on?

This responded to the wrong "my-hardware-is-defective" assumption that is so common in a Windows monoculture. I have seen flash drives "fail" countless times. The most common problems are:

I saw a young woman return her memory stick to a vendor that offered a warranty. She described some of the problems mentioned above. Of course, as Windows users never blame their OS, they have to blame this strange behavior on something and the poor hardware is the one that gets all the kicks. So they complain to vendors.

The vendor, inadvertently, falls into the trap. So, s/he either returns the money or replaces a USB drive that is perfect with a new one. This becomes a truly lousy business that, given the quantity of repetitions, was enough to show red numbers. Hence, the vendor decided not to sell that kind of hardware anymore.

With Linux, I have been able to show many USB flash drive owners that the memory stick is perfect and that the problems listed above are the consequence of virus infections. These infections happen thanks to the weak security of Windows and the ignorance of the user. To get rid of the problem, all you have to do is remove the pesky hidden files...which you achieve with two clicks in Linux. In Windows, well, you need to disable system restore, go to the registry, apply patches, reboot (can't do anything without rebooting, you know?)... You might also need a great deal of good luck and all the charms you can get.

I have a question. What will vendors do once that viruses become more common in, say, memory cards? Of course those will not be perceived as OS problems, either. Are those storage devices going to be banned as well? No wonder why Microsoft could come up with the stupid idea of banning infected computers from the Web...
en marzo 17, 2011