Observations on the growth of Linux use

Ah, statistics! How we love to deceive ourselves with them! Sometimes we tend to forget they are numbers applied to measure a reality, but they are affected by many variables. Therefore, statistics become a useful prediction, but a prediction is, ultimately, a guess nonetheless.

I am saying this because, since I migrated to Linux in 2009, I have been listening to Windows fanboys chanting that "according to Netmarketshare and StatCounter, Linux accounts for a skimpy 1% of the total market". And the funny thing is that they believe it!

My eyes, however, show me a different picture. When I migrated, the only Linux computer I ever saw was mine; I never spotted another computer running the Penguin OS in public. During the last two years, however, I've run into students who have Linux computers... but Netmarketshare has kept saying that Linux usage is 1% in 2009, 2010, 2011 and, yes, you guessed it, the first two months of 2012, too!

W3counter.com is another source that is frequently quoted to say that Linux represents a 1% marketshare. Notoriously, in 2009 it said Linux was 2% and then declined. Right now, W3counter is showing a gradual increase (1,67%).

It seems that Steve Ballmer, CEO of Microsoft, did not believe those numbers. Back in 2009, as he was giving a presentation to investors, he showed a slide that tells a different story. Wisely, he did not include any numbers (not to disclose critical information and scare investors 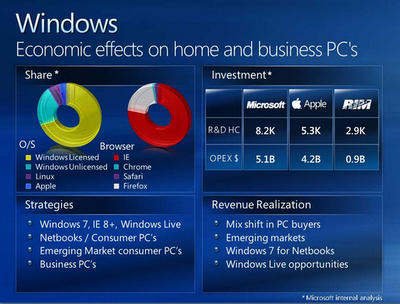 away, I presume), but the pie chart indicates that Microsoft either:


Who would you believe, then? I would go for Ballmer in this case: one would expect him to have more reliable data as he was addressing investors, don't you think?

If we take Ballmer's pie chart as reference, then Microsoft believed Linux had a marketshare of around 5% in 2009, judging from the graph proportion.

W3schools.com throws numbers onto the table that match Ballmer's pie chart (and his statements that Linux was worrisome): When Windows 7 retail was released (October 2009), W3schools' Linux count showed 4.2% marketshare and that number has kept going up to 5% in February 2012.

Another interesting observation is the behavior of Distrowatch. Yes, yes, I know that you are going to say that those numbers cannot be taken as an accurate measuring. Point well taken. However, Distrowatch count shows that either:


The latter scenario shows more interest in Linux which, in turn, suggests an increase in Linux use, especially when one pays attention to the last distro reported (#100). Let us see: in 2009 it was MOPSLinux (73 clicks). CD Linux took the spot in 2010 (86 clicks). For 2011, DreamStudio got the #100th position with 90 clicks. During the last three months of 2012, that same position belongs to LFS, with 131 visits.

That means that the last position in Distrowatch jumped from a two-digit number to a three-digit one. If we take that merely as an indication of interest in Linux, then it has increased in a 55.6%.

This matches the reality I see more accurately, the same one that Ballmer inadvertently described in 2009. One wonders what his numbers will show today.
en marzo 24, 2012