Discrepancies between Jogging Apps in Firefox OS and Android

Last year, I decided to try to focus a bit more on my health and picked up jogging.

I've always liked jogging: one needs practically no equipment and it's good to lower your stress.  You know, you leave the crawlaggars behind ;-)

I said "no equipment" because many people run today with their smartphones.

I must confess that, at first, I did not like the idea of taking a phone out when I am jogging.  However, I like to listen to music while on the street.  Moreover, there are apps that can actually motivate you to keep going.  For Android, my favorite is RunKeeper.  For Firefox OS, Run-Bike-Hike is my app of choice.

Today, I decided to compare the measuring accuracy of both apps, so I took the Firefox OS and the Android phones for a 2 km walk.  I discovered that, despite activating the apps at the same time, they show different readings of the distance and pace.


This is what Run-Bike-Hike gave me on Firefox OS: 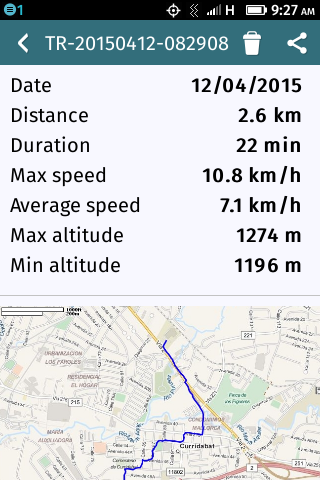 On the other hand, RunKeeper says that I walked a bit less with a slower pace:

The moral of the story is that one should never take the readings of an app too seriously.  Technology can also make mistakes.
en abril 12, 2015

With the present sanitary emergency created by COVID-19, I've been away from this blog for two months already. It's not that I hav...