Three days ago, DistroWatch announced that Elive had received an update.  Although it is not an alpha version, I wanted to save it for my alpha testing this coming weekend.

However, after trying Netflix on Elive to update my previous post, I decided to update the packages to see what happened.

The process finished without any issue, so I wondered if I had received the aesthetic improvements that the DistroWatch post talks about, in particular " wallpaper - dynamically changes depending of the hour of the day, looking more magical and nicer for your eyes, and it also includes a hidden surprise for Christmas."

And, sure enough, I was surprised!

When I closed Firefox, which takes all the screen, I saw this:
I quickly switched to my other wallpapers to see if they had been removed or affected negatively in any way by the change.  As they were fine, I went back to the dynamic wallpaper and found the old morning version.  When I was asking myself if something had gone wrong, my eye caught an iconic figure moving from one side of the screen to the other: 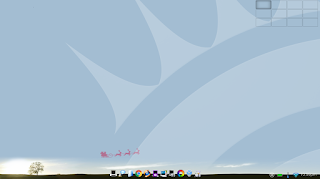 Those details really make me want to turn my computer on despite the fact that I am on vacations.  Truly, Elive is a great Linux distro, both concerning performance and eye candy.
en diciembre 26, 2018