Thank you, Linux! My Windows computer is infected 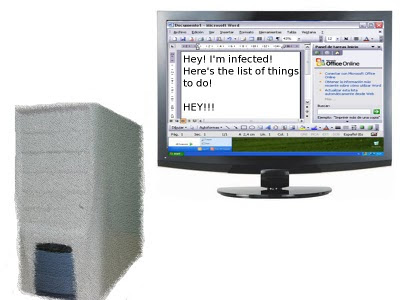 That's right. My desktop, which runs Windows, is infected and I blame Linux.

As it normally happens in these cases, this new infection in my XP system can be traced back to user carelessness. However, I think that calling me "careless" is not fair for I did everything on the book (and more!) to keep a Windows machine healthy:

1. I have an updated antivirus, which runs full scans when I turn the PC on.
2. My firewall was up and running.
3. I have additional anti-malware software for protection.
4. Firefox is my browser and I installed add-ons for extra security.
5. I neither open suspicious email attachments nor visit questionable sites.

Since I was not careless, I am not the culprit. However, if I did something wrong, this is it: I have been flirting with Linux for over a year. Yes, Linux is guilty, not I, for the infection of my Windows computer!

Let me explain: After a whole year of using Linux (mainly Mandriva, but now Mepis because of an experiment I indulged in), my security sense became somewhat softened. After all, I do not use any antivirus to go online with Linux and the computer has never gotten infected during all this time. In addition, USB viruses cannot jump onto the hard drive and, thus, I suppose I grew over-confident. But it was not my fault! Linux made me do it!!

I used this public computer and saved a file onto my USB drive. Then, because I am accustomed to working without any concern thanks to Linux, I forgot to check the USB contents. When I returned home, I booted my desktop computer in Windows and plugged the infected USB drive.

Since Windows XP has become a little slow, I went for a cup of coffee and, when I returned, my computer was behaving in a way that I had not seen for quite long, yet not one I can call completely unfamiliar. My firewall was flashing alert messages crazily, the antivirus could not be updated, and the system froze on me as I sat dumbfounded. As you can see, THE PENGUIN NUMBED MY WINDOWS SECURITY SENSE!

Had this happened two years ago, my reaction would have been one of total despair and indescribable suffering. I would felt miserable anticipating the days trying to restore my system and I would have probably called myself a large assortment of expletives.

Yes, thank you, because Windows is boiling with viruses and I just do not care. Linux has taught me to relax when Windows is infected because my productivity is not brought to an abrupt halt. Even when Windows is down, my computer can WORK!

I am not irresponsible; I am realistic. According to this post, awareness is paramount during a computer infection. I am aware that MY COMPUTER IS NOT INFECTED; WINDOWS IS. As a matter of fact, I can boot this same PC in Mandriva and work normally, unaffected by the condition of the Windows partition. I think that it is far more irresponsible to make people believe that Windows problems are equivalent to PC problems. That is misinforming the public, you know?

Oh, but the author also suggests that I should be concerned about my files. Well, if I need a particular file, I can access the sick Windows partition and retrieve it with Linux, so, why to worry? Let the viruses feast on the OS that cannot protect itself appropriately for a while. When I can spare four days or so, I'll take care of the pesky little hungry thingies. Right now, I am extremely busy and have no time to lose babysitting an OS that, like a spoiled child, selfishly craves for undeserved attention.
en octubre 09, 2010