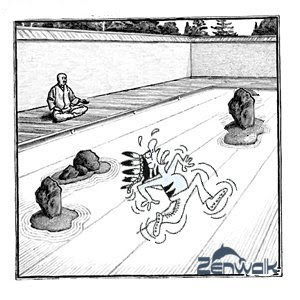 Yesterday, I downloaded the Live CD of Zenwalk 7 and I must confess that I liked it a lot. Not only did it have full support for Japanese IME via iBus, but also its Xfce desktop was simple enough for a beginner like me. So, I decided to download the standard CD to install it to my now triple-boot netbook (Mandriva 2010.2, Pardus 2011, Mepis 11). And then my dance in the Zen garden began. Little did I know that the predictable, calm Waltz at the beginning of the installation was to morph into a rabid, passionate dance for survival!

After seeing many installations Cds and DVDs before, I expected nothing out of the ordinary when I booted with the Zenwalk 7 CD. Maybe I was not too concerned about the interaction, but there was something different that I had not determined until the process was well advanced: all installation directions were provided in text. Yes, that's right: no GUI for Zenwalk! I checked the info in Distrowatch.com and it's clearly indicated that the installation process is text mode. So, inadvertently, I was attempting my first text mode installation. 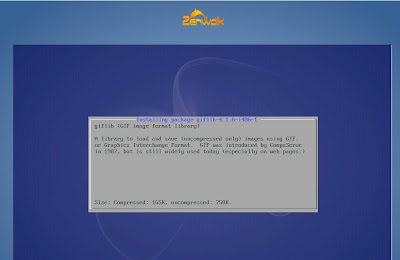 I cannot say that the process is complicated or confusing because the different screens provide clear information of each step. However, when I got to the touchy operation of partitioning, the dance switched from a calm Waltz into a furious tango: I had absolutely no idea of what I was doing. The partitioning tool located all the partitions in my HD and was telling me that it was going to install in one of them and use the Mandriva swap partition for Zenwalk. Regardless of what I tried to do, the system would just proceed, so I buckled up for a bumpy ride.

And then, LILO! I have never used that for booting but suspected that I was not going to be able to boot Zenwalk without it, so I chose simple install (now I was sure the ride was going to be bumpy!).

The process came to a dead end with the creation of the root and user accounts. The text superimposed, so I could barely read what the system wanted me to input. Basically, I got to a screen that demanded a login and a password and everything I typed was incorrect. Therefore, I rebooted the computer without the CD and, SURPRISE! No GRUB, GREET LILO!

Lilo? I must say I saw more of a "Stitch" because the little mischievous booter only showed an entry there: Zenwalk. All the rest of my operating systems were gone... I presume they took a stroll in a Zen garden somewhere :-P

And, of course, the Zenwalk system was inoperative. A great place to be. From here, the dance became something more like those energetic folk dances in tribes, where a Shaman swirls, twists, and jumps with body contortions that resemble an act of desperation.

Luckily, the Mandriva 2011 PowerPack DVD has a rescue application that restores your GRUB. That was enough to take Mandriva, Pardus and Mepis out of their Zen meditation. But there were some side effects. When I booted Mandriva, it did, but painfully slowly. I switched to verbose mode and saw that some partitions were apparently renamed or something, so Mandriva had problems mounting them.

When I finally got in, I rebooted to see if Mandriva would pick up some speed this time and, pretty fast, I got into my very first Kernel Panic!

The solution? Well, I reinstalled the system leaving the /home partition there, and in a matter of 25 minutes, Mandriva was back to normal. Pardus and Mepis are healthy, too.

I cannot blame Zenwalk 7 at all for this mishap. I understand that it was entirely my fault because I was not prepared to carry out this kind of installation. Zenwalk is a well-built, functional Linux system. That its installation is presently beyond my limited knowledge should not be taken as a negative point at all.

I'm sure that some reading will clarify my questions. When I do that, I'll take Zenwalk 7 again for a dance. Hopefully, I will perform better then.
en mayo 14, 2011