Zenwalk 7: Shall We DANCE? 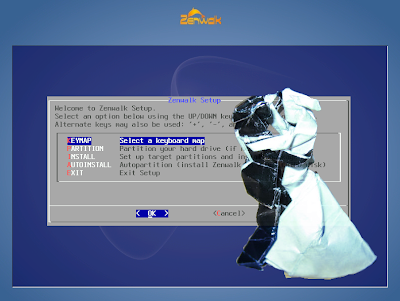 Five days ago, I wrote about my epic fail trying to install Zenwalk 7 to my netbook, a system already running several Linux distros. I described the process as a dance that started calmly and gradually changed into a non-stop frenzy that ended with me messing up the whole system. I was not prepared to face the install but, as I promised, after doing some reading, and supported by the help of readers both in Tuxmachines and Linux Today, I am ready to give it another go. Zenwalk 7, shall we dance?

Upfront, let me clarify that my netbook was a quad-boot (Mandriva 2010.2, Pardus 2011, Mepis 11, Mageia 1 RC1) the second time I attempted to take Zenwalk for a dance again. I know that that quantity might seem excessive given the fact that one can use virtual machines. However, because of the modest configuration of a virtual machine, I consider that they are ideal for testing, but you cannot enjoy the full potential of the Linux distro unless you install it. Why installing so many distros? To maximize writing productivity. Sam Dean might be right about writers and dual monitors, but I have discovered that, when I write, changing not only the workspace, but also the entire OS, gives me a mental relief and the possibility of keeping my projects in "different typewriters".

Of course, that quantity of distros became part of my headache last time. The other part was that was not prepared to carry out a text installation. The good news is that, thanks to the support of readers and their insightful comments, I was better equipped this time.

As in the Japanese film "Shall we DANSU?", I was a Sugiyama determined to learn the Zenwalk steps. Like him, my initial performance was deplorable. However, practice makes perfect. Therefore, I was not discouraged and analyzed what I did wrong.

First, the installation problems I was having occurred due to my lack of familiarity with the process. For example, the partitioning tool gives you all the information you need if you go to the appropriate tab. Once you are satisfied with your settings, all you have to do is hit "write" to apply the changes.

Then, the bootloader LILO: I tried first following the suggestion of keeping LILO in the boot sector of the partition, not the MBR. However, it did not work because I couldn't boot it to finish the post-configuration process and the info in lilo.config did no good, either.

I suspected that the problem was caused because of the partition soup that I had. Mageia was located in sda 9, but GRUB showed that it booted from sda8, which was my Zenwalk root partition. So, I tried a more Spartan approach: I deleted all OSs except Mandriva and reorganized the partitions. After that, I reinstalled Pardus, Mepis, and Mageia (I got the RC1, yay!). Now that all the systems were sitting on the correct chairs, the dance with Zenwalk could proceed.

I reinstalled Zenwalk without a glitch (reading and preparing DOES make a difference, right?). This time, however, I changed the location of LILO and put it in the MBR. Of course, that sent my other OSs to the Zen garden again, but I did not mind because I wanted to finish the Zenwalk installation. When Zenwalk was up and running, I grabbed the Mandriva PowerPack DVD and used the utility to restore GRUB. In doing so, I lost Zenwalk, but I mounted its partition and following the process here and opened lilo.config.

My only problem was now to boot Zenwalk. I tried several solutions I found online, but none of them made GRUB stand up and invite Zenwalk to the dancing floor. So, I resorted to Mandriva Control Center. I opened the boot manager and tried to add the entry manually. Again, I was not sure of what I was doing, but I had to give it a try. I added a new Linux entry cutting and pasting info for tag, append, and image from lilo.config. Then, I clicked "advanced" and changed network profile to "default" and copy/pasted the info for initrd.

I rebooted and, when I saw the entry for Zenwalk, I selected it without hope. However, GRUB, full of valor, stood up and walked decisively to the partition where Zenwalk was sitting. Using a trope, I could almost hear in disbelief GRUB say "Shall we DANSU?"

So, now I'm the proud owner of a penta-boot netbook that has Zenwalk 7 as one of its five operating systems.

Dave Spiegel was right when he said that I could have used a distro that does it all for me, but then I wouldn't have learned anything. And Zuru was also right: this was great fun and the sense of accomplishment is irreplaceable!
en mayo 19, 2011