There are days in which we should avoid computers

Yes, there are days in which we should avoid computers.

You know, during those days, in an ideal world, we would get an alert message urging us to get a professional diagnosis.  Then, a doctor would run some quick tests on us and would advise us not to touch a computer in two-to-five days or so.  Even the horoscope should say something like: "Taurus:  Because of the influence that Mars exerts on hard drives, keep away from any computer not to ignite trouble".

I am not only talking about older folks that cannot tell a CD and a DVD apart or about technology-blind people who stare at you blankly and go "Huh?" when you ask them "What format did you use to save that document?".   I am talking about each and every individual who uses a computer, be it a Facebook junkie or an IT manager, a Linux guru, or BSD/Haiku developer.  Anyone should keep distant from computers sometimes.

Call it a layer 8 reading fail, the PICNIC result or the well-known ID-ten-T error, the fact is that we sometimes cause havoc on a perfectly sane and healthy OS because of our own interaction with it... even if we cannot explain why.

Take, for instance, what happened to me last week.  I started browsing the Web with my prefectly functional Mageia 2 Linux box.  Meanwhile, a small voice coming from the back of my head was urging me to shut down the system and go do something safer, like locking myself out of the office not to have easy access to the computer.  Yet, I chose to ignore the call of Wisdom and, after reading about the latest Java manace, I decided to run a test for rootkits on my system.  That was when I lost my grip on reality and went down the rabbit hole.

I must say that I use Firefox and have NoScript, AdBlock Plus, and other add-ons for security.  On top of that, I had disabled iced-tea.  However, I ran the tests with rkhunter and found a worrying message: A rootkit called Gaskit was installed on my system!

Panic invaded my brain and the Windows mentality took over; in a second, I was trasported to a day four years ago, when virus infections were as dreadful as expected, and all my neurons went in zombie mode to format and reinstall the system.

Even so, I visited some forums and read that, after a Mageia update, rkhunter flashed false positives.  I was familiar with false positives since my Windows days, but the zombie neurons had already multiplied and ate up my remaining sane-thinking ability.  I began formatting.

Luckily, the format-reinstall process is accomplished with greater ease and speed in Linux than it takes in Windows: in about an hour and a half, the system was up and running as it was before my sanity collapsed.

Without the fear, I began reading more about how to actually test if Gaskit was installed or not.  I tried the verifications and guess what: it had been a false positive all along! 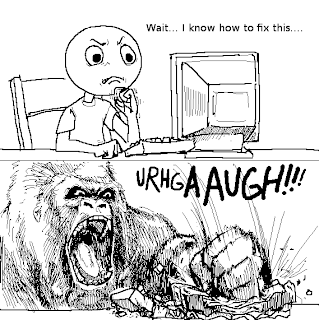 I could almost sense the resentment coming from the computer.

From that experience, I learned that one should monitor oneself for stupidity before using a computer.  We all know when we are being stupid, don't we?
And then, if the stupidity level is exaggeratedly high, we should simply walk away from the machine until we regain some sense.