Linux has become really stable.  I remember that, when I migrated, I waited for the two yearly Mandriva releases.  Then, it was for the yearly releases of Mageia and OpenMandriva. But releases have been slowing down.  While Mageia and my daughter had pretty much the same age at first, my child will be 9 this year and Mageia is not 7 yet.

PCLinuxOS has to be updated frequently and PicarOS Diego and Elive are special.  I once updated PicarOS and the result was a major disaster: it became a weird Minino spin.  Elive took more than 5 years to move from 2 to 3, but it's awesome.

And then, there's Fedora.

I installed Fedora 25 as an experiment and upgraded to 26 and 27.  But then I became lazy and lost track of its development because, once that everything worked the way I needed, the thought of installing the new distro releases went to the back on my brain.

However, today I tried to upgrade the Fedora packages and all I got was a message saying that my distro was up-to-date, which I immediately suspected because Fedora releases upgrades quite frequently, just as PCLOS.

It goes without saying that I have to download the ISO and install it before the start of the new semester.  I am on it, getting the Fedora 29 KDE spin.  Darn, I feel like that client that rushes into the store in the very last minute before it closes!

Well, at least I know that Fedora is changing the logo :P 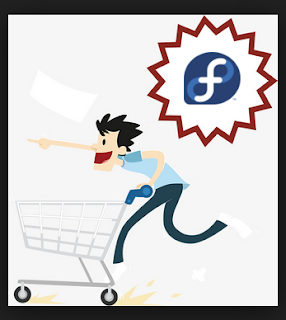