As promised, I took my OpenMandriva Lx 2013 RC1 home to install it to my desktop computer. A while ago, I installed the beta --after a tenacious fight, I must admit--, so it was time to upgrade it.

At first, the task seemed as difficult as trying to make a submarine fly: to begin with, the keyboard was dead (more on that in a moment) and the painfully slow installation process got stuck five times.  However, I discovered that the extremely slow installation and repetitive halts were due to a corrupted DVD.  So, I burned a new one and started again.

These are the two most serious issues that I found along the process:

1. Lack of an operational keyboard
At boot, regardless of which of the two installation methods provided you chose (regular or basic graphics), the keyboard will refuse to work.  Of course, since you can navigate the screens with the mouse during the first steps of the process, you might not notice that your keyboards is useless.

This one is not a new problem; it bugged me also during the install of the beta. What beats me is that the dead keyboard has still made it to the RC1.  I mean, it is a serious issue that should have been taken care of earlier.

Anyway, I could activate the keyboard by rebooting the distro, selecting the basic graphics install, and then hitting TAB to get some options.  Once the installer got to the keyboard selection screen, I waited a couple of seconds and the keyboard was operational.


The rest of the process was a bit slow, but simple if you have installed Mandriva or Mageia before.


2. Grub installation on partition
This is simply impossible because, although there is a drop down menu, the only option that you get is the MBR, so OpenMandriva's GRUB2 will wipe out your existing GRUB.

However, OpenMandriva was finally installed and ready to run.  These are the good points:

2.  Improved login screen.  The login screen, which got a bit stuck on Mandriva 2011, works now perfectly and is more visually-appealing. 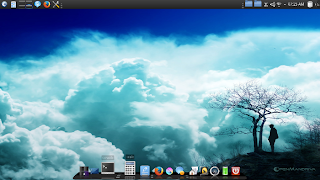 4. Fully functional GRUB2 menu.  Although my previous GRUB was gone, it was replaced by one that picked up every other distro and identified it flawlessly, regardless of the fact that some of those distros used legacy GRUB.

5. Improved timeline (with SimpleWelcome launcher).  For Facebook lovers, the timeline now displays updates of your friends, which you can comment and like quickly without  firing up the browser.  The updates become larger with a neat animation effect when you clic on them.

After balancing positive/negative points, I would say that OpenMandriva Association is sticking to its plan to deliver an original, fresh, and innovative Linux distro.  Even though it might take some time until all isues are ironed out and the vision becomes a reality, it is good to know that the association is not falling for the fallacy of "let's dumb our Linux down so that Windows users adopt it."  The quality of their product is pretty high.

Right now, the RC is powering my desktop and my laptop.  Using the distro is a delight, too.   I even wrote this entry with OpenMandriva RC1.