Updates knocking on the door!

I remember that, back in my days as a Windows ME user, I learned to be truly afraid of them.  Updates were supposed to help your computer but, almost inevitably, something would go very wrong after applying them. 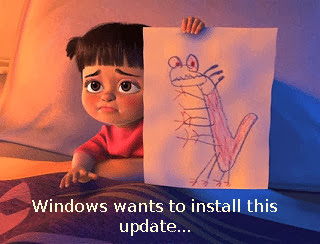 I would have thought that, by now, Microsoft mastered the process of providing updates that do not break your computer.  However, that is not the case.  A colleague told me that her husband applied updates to her Windows 7 desktop and the old MS magic was performed just the same: the sound card went crazy and refused to work with the microphone and the webcam also stopped working.

And then, there's the celebrated Microsoft update to convert your Windows 8 RT computer into a Windows 8.1 RT... brick!  It went so bad that Microsoft had to prevent people from installing it.

I don't know if they fixed it but, according to this post, the update to Win 8.1 now seems to convert your computer into a cat (because it does not play nicely with mice).

To be fair, I have also heard complaints on updates coming from Linux users.  I myself have messed up with some Linux installs because of carelessness during the updating process.  My last experience was when I tried to install PCLinuxOS 2013.10.  Of course, it was all my fault: I had been sluggish with my bi-weekly updating process and, being PCLOS a semi-rolling distro, that is a rather serious mistake.

I learned my lesson and today's PCLOS update went smoothly.  It was a major one, too: it converted my KDE 4.10.5 laptop into a KDE 4.11 machine.

By the way, I am also getting a Mageia update with Firefox 25... At last!  This thing of not being able to read PDF files directly from the browser was getting me frustrated...