I've seen how people who were paralyzed by fear when using a computer (even after taking formal courses on Windows) liberated themselves when Linux was installed on their machines. Since the general idea is that Linux is a more difficult OS than Windows, the explanation to this mystery had eluded me until today, when I reviewed all the security programs that I, as a Windows user, kept for some peace of mind.

Of course, in my Windows days, I had an antivirus that I trusted...until the infamous Sircam deleted my thesis. So I got another AV, but there were lots of viruses that could fool it and I just accepted that reality. Everybody would recommend an antivirus program to me and I obediently tried a good many, but all of them failed. I also had an anti-spybot solution, anti-malware software, a zombie monitor, a firewall, additional antivirus programs for specific USB threats, a browser hijacker antidote, and I used to run scans of those every time I thought my computer was acting up, which was pretty much every single day. That was living in an absolute state of paranoia!

No wonder why people might feel uneasy when they approach a computer. They have been bombarded by all the messages telling them that there is danger everywhere: online, in USBs, in PDFs, in crashing code...and this negative expectation becomes a pending sword on their heads that certainly does not motivate them to learn about the OS, to do their banking online, or to work peacefully with a computer. 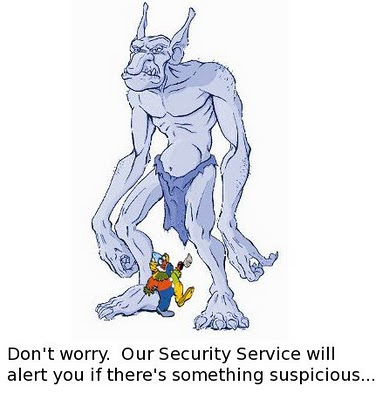 The only lesson you actually learn from this situation is that you cannot trust any security program, so you (tembling) turn on your computer, work with fear, and hope you can finish your session without any problem; all of which becomes magnified when you have to do a bank transaction online...And, if you must do it from a computer that is not your own, the worries fall on your head like the furious ice pellets of a merciless hail storm.

For those people who switched from Windows to Linux, the latter OS took a great deal of stress away from computer usage. Yes, I know that Penguin bashers are going to claim that Linux can also be targeted by threats and that, if one is careful, Windows can be very secure, too. However, we know that, in Windows, the chance of getting hit is high whereas, in Linux, the opportunity for you to be attacked is drastically reduced. We know that security in Windows is a joke, so you can never be too careful. You must protect yourself against spyware, malware, viruses, you name it. We know as a fact that your protection has to be updated everyday to be effective, so we go back to paranoia and this tight chest that cannot let us breathe as we turn the computer on. And, once you get hit, well, that's the end of the show. Recovery can be painful and you have a lot to lose. Your valuable information gets compromised because, if they stumble, technicians (at least in my country) will always end up formatting your HD... Thus, you pay them for destroying your data! I'm pretty sure that some of them know that Linux can solve your problems but, obviously, they won't tell you.

Do you want a real solution for those problems? Then go to this page and read carefully. Yes, Portable Linux IS the answer. Not only is it cheaper (it's hard to beat free), but you can also rescue your own system. Believe me: you can save your data (both from viruses and lazy technicians). You can get back to work quickly and do your banking online confidently. You can live without the fear of viruses, spyware, crashes, and zombie computers. You take off your chest that prickly sensation of anguish when you haven't updated your "protection" software. And most importantly, you can get rid of this computer paranoia that prevents many users from enjoying the time they spend in front of a PC.
en julio 12, 2010