Don't give Linux to your mother 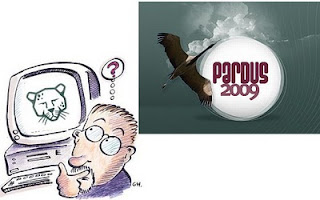 I'd like to give an honest piece of advice to those who are concerned about their parents and their computer skills. Whatever you do, don't give Linux to your parents. Yes, I know that sometimes their constant calls for help regarding security breeches,crashes, and virus infections might make you feel tempted to install one Linux distribution on their computer...but be strong and don't give in!

Of course, many readers might be expecting (if not demanding!) an explanation for my position. Well, let me spare you all the boring reasoning; instead of that, I am going to give you an illustration in the form of an anecdote which I believe will suffice.

My fifty-something mother, who had never used a computer until three years ago, took a course on Windows and MS Office and, as she grew confident with her new skills, she bought herself a nice computer. However, despite all the time and money invested on her courses, she could not advance in her computer usage because she would constantly get the familiar error screens that Windows gives to those who trust Microsoft, not to mention the common virus infections that made the machine act funny. It goes without saying that the episodes would normally end with her justified frustration ("I did not cover any of this in the course!") and our visit to her house to fix the problem...time and again.

Then my brother got truly fed up and installed Pardus Linux (Anthropoides Virgo, I think) onto her hard disk in 2010. The reaction was instantaneous: after a minor resistance on her part, the calls concerning computer problems dropped to almost zero. One of her last calls was to tell me that she was proud because she had been able to burn an MP3 CD using K3b. I felt really happy for her because she had terrible problems trying to do the same in Nero.

But here comes the most remarkable thing: since viruses were no longer a problem, she got an ASDL connection to the Internet last January 10. Everything went off quite nicely until two weeks ago. We got a phone call: something had happened to the modem and she could not log in. It turned out that it was an ISP problem, so they sent a technician to solve the situation and...the guy had never seen Pardus Linux! He was extremely surprised because a woman her age was using Linux, an OS that is supposed to be horribly hard to use.

My mother told me that the technician spent some extra time trying to configure the modem, but he succeeded and went away proud because he could...(wasn't Linux impossible to use?)

When I saw the computer, the guy had messed up with Plasma and deleted some applications from the lower panel, too; he also threw the desktop icons to the garbage bin and resized the screen size. To sum up, "no puppet kept its head", as written in the Quixote.

Returning the computer to its normal state was a matter of 15 minutes and my mother said "It's because Linux is easy". Well, she is right. In fact, Pardus 2011 is even more user-friendly. So is SimplyMepis. And Mandriva 2010.2 is easy too, according to this article.

Therefore, do not give Linux to your mother or father. They might end up loving it, learning what they never could and, worst of all, putting an unsuspecting technician accustomed to Windows to shame.
en febrero 05, 2011