Reading www.tuxmachines.org, I found this article that describes a new feature in LibreOffice 4: the possibility to decorate LibreOffice by using Firefox personas.

Yes, I know that some LibreOffice users might find this feature trivial or silly.  I, for one, appreciate the idea and the effort of the developers Kendy and Oliver.  The way I see it, anything that contributes to make my computer (and the applications I run) feel my own, the more productive I become.

To use an analogy, a coworker told me that she once worked in an office in which it was forbidden to personalize the working environment.  Thus, family pictures, computer wallpapers, and even personal mugs were all out of bounds.  She described her time there as "nightmarish".  I understand what she meant.

Eager to try the new feature, I downloaded the LibreOffice 4 pre-release and, following the process I described here, installed it in Mageia 2.  Although I was expecting the previous and new versions of the office suite to engage into a ferocious dogfight, they decided to coexist peacefully.  I even got separate menu entries for both versions.

Then, I started playing with the personas.  It seems that light colors work better than dark ones.  So far, my favorite look for my LibreOffice install is the persona called "Tux Foxkeh Metal". 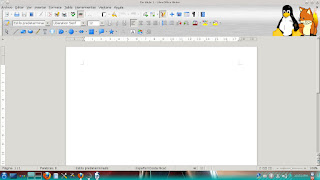 The only problem I detected is that I cannot use SCIM for Japanese input in LO version 4 because of the lack of the libreoffice-gnome-integration package, I suppose.  However, as SCIM works perfectly with the previous version, I do not worry.
en enero 11, 2013