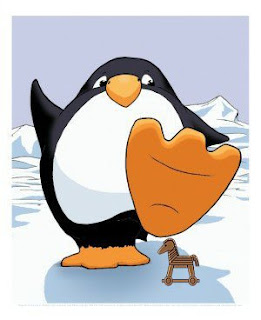 In my net surfings, I have encountered that smoke screens about Linux security are becoming popular. The way in which certain threat alerts were made public amused me. I believe that there was a malicious intention to discredit the Penguin OS using slanted information behind the sensationalist hype.

I found one smoke screen in Yahoo. The feature was a post titled: "Linux Trojan Raises Malware Concerns". I guess the point was to make Linux beginners question their choice. After all, if we migrate to Linux to feel safer and this OS is as vulnerable as Windows, why the bother? However, the strategy did not work so well because even Linux newbies could see beyond the alarming news. (You can read a Linux beginner's nice response about this story here). The original news read "a vast collection of Linux systems may, in fact, be pwned". Let's see:
1. According to statistics, Linux has the 1% of the desktop market.
2. The threat was neither found in the official repositories of "major" Linux distributions (Ubuntu, Fedora, OpenSuse, Mandriva, etc) nor in "minor" ones (Mepis, Zenwalk, Pardus).
3. Users had to download and install the infected file themselves from a site (This means we are not talking about MOST beginners, who are becoming familiar with the repositories of their distros).
4. The file is a tarball. For computer beginners, installing one of those is like changing the computer processor.
5. The infected file is for chatting using a specific platform.
6. The threat was not likely to have compromised enterprise Linux servers (where more Linux systems are found).

Then, what does "a vast collection of systems" mean here?
---

Why aren't people buying these things so easily anymore? I have the theory that, while the success of Windows was the ignorance of the user, Linux communities teach their users and this knowledge empowers people. After all, in the 21st Century, more computer users are awakening. Little by little, we are breaking this shell of fear and gullibility and we are beginning to see through the smoke generated to make us stumble. We read. We check. We double-check. We participate in forums and get informed.
Above all, beginner Linux users are abandoning herd mentality.
en junio 22, 2010