On Variety and Linux 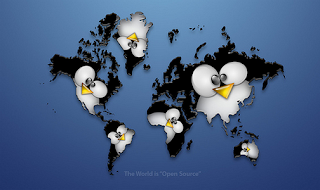 Ernest Hemingway once said that one cat just leads to another. Somehow, the same happens with Linux: rarely is it that penguin lovers only try one distribution. Of course, the enormous variety of distributions can be frightening to beginners but, once they get over this initial reaction of confusion or fear, if they decide to learn, they benefit from the vast assortment that Linux provides. Yes, one Linux leads to another. Once you try several Linux distributions, you pick your favorite one and, in the process, you learn to navigate several other OSs. Today, that is TRULY A GOOD THING.

Of course, it has been argued that it is this same variety that scares potential migrants away from the free operating system. This idea is true up to a certain extent. First, Windows hegemony has been grounded on a myth that is beginning to fall: people once believed that the learning curve of a different-than-Windows OS was high. We know that Linux can be as friendly as any other OS. I have seen cases of computer users who made no progress in Windows, but once they got Linux, they felt more at ease when using their computers. On the other hand, Windows XP users have refused to adopt Vista 7 because they are also afraid of the learning curve. So, this idea that Linux is difficult to use is slowly fading away.

The other situation that is contributing to overthrow fear of options is fueled by Microsoft itself. Users who like to customize their systems have become frustrated with the rigidity of Windows 7 Starter or certain well-known problems that the latest MS OS displays, such as the auto-arrange Windows feature. In other words, the less-is-best policy that MS enforces does not seem to satisfy users anymore. Therefore, as users grow more experienced, they abandon this sense of fear of destroying the system if they tweak here and there. Hence, they demand OPTIONS. Options are the threshold of FREEDOM, one of the ideas that the Penguin OS champions.

Of course, recalcitrance is high. Some blame Ubuntu's flops for migrants that go back to Windows. However, even so, there are people who resist going back because of what Microsoft is doing (check the case of the restaurant manager here).

The stagnant adoption of Windows 7 and the possibility of Ballmer paying for it with his job prove that MS's hegemony is cracking up. The world is changing and Linux users are presently more prepared to face the advent of a new paradigm. Why? Well, in a post-globalized world, plurality is perceived as an opportunity, not as a disadvantage. Linux users can handle MORE than one operating system. One day, to get a job, having that ability will be as important as speaking a foreign language is.